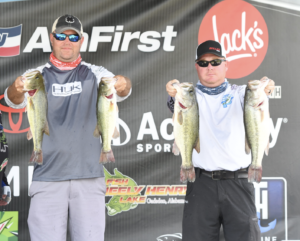 Stop number three for the North Division of the Alabama Bass Trail is Wheeler Lake. This week the weatherman has thrown teams another curve ball.  The forecast is calling for 100% chance of rain, with thunderstorms and winds 10-15 mph on Saturday. After consulting with local officials, the event has been re-scheduled for Sunday. The team of Chris Brittain and Eric Springer are hoping the rain moves through quickly and water levels stabilize to help them have back-to-back wins on Wheeler.

Last year, Chris and Eric found the magic spot on a sandbar up the Elk River and clinched the title before 9 am with 21.84 pounds. Chris said, “I would like to have that kind of day again, but this past Monday I could have pulled up to that spot, walked on it and barely got my knees wet because the water was so low.”  Both said they would like to see the water “come back up a little and maybe get a little color back.” Chris was out for a little bit Tuesday and noticed “it seems like it’s starting to clear up more. The fishing would be better if it was a little more stained.”

They both feel the key to this weekend is the water level and shared “it all depends what TVA does. They could suck the water down, and we get no rain, then we’d be stuck without water; or they could leave it like it is and it come up another 2 feet. You can never tell, so it’s hard to pattern the fish this time of year with all the water level changes.” Teams will all have to wait until Sunday morning to see what the water level is. Chris and Eric said they would like to see the “water level between 553 and 556 on Sunday.”

They noted that the fish seem to be in a pre-spawn pattern. “Some people might disagree with that, but we feel the fish are not there yet; with the way they’re moving the water up and down, the fish are not going to come up and do their thing while this water is changing so much.”   Chris said, “you will have some fish that come up early, but the majority of the fish at Wheeler have long adjusted to this water fluctuating and wait until it comes up and stays up for a while before they spawn.”

Teams can expect to find fish up shallow no matter what the water level is. It’s a well-known pattern that the bushes on Wheeler are a great place to find fish. “A lot of tournaments have been won out of the bushes, and teams know that, but if the water drops to 553, the bushes will be out of the water again. If that’s your pattern, you’re stuck.” Teams should have a backup plan this week and be ready to adjust to the changing conditions.

With water temps close to the 70-degree mark, “teams could just open their tackle box and throw whatever they want, and it will probably be productive,” said Eric.  However, the typical pre-spawn baits will be in play this weekend and teams can really use them all over the lake. Chris feels like the “three key baits that could play into this weekend are a spinnerbait, a crankbait and a jig.  If the water rises and stabilizes, look for this weekend to be very productive for many teams.”

All friends and family are welcome to attend this event, bring lawn chairs and practice social distancing. Everyone can watch the live weigh-in and over 4 hours of on-the-water live coverage on the ABT Facebook page and the ABT website. The launch and weigh-in will be held at Ingalls Harbor located at 802-A Wilson Street NW in Decatur, AL.