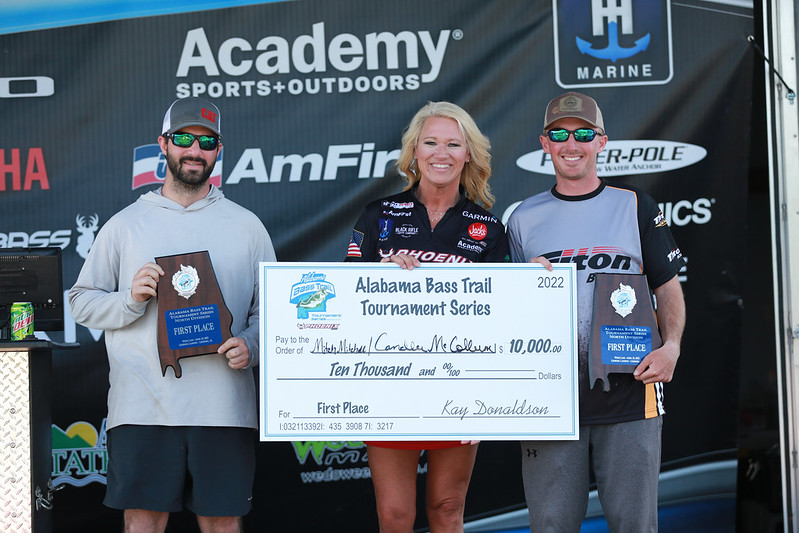 Leesburg, Ala — Weiss Lake, known as the Crappie Capital of the World and home to some great bass fishing, hosted the third stop for the North Division on warm and sunny Saturday. 225 teams fished for the top prize of $10,000, and many anglers located fish on the bed spending most of their day fishing for those often hard to catch fish.

This event was the 100th tournament hosted by the ABT since its beginning in 2014. Prior to this event the ABT has paid out over $5.1 million. Kay Donaldson, Program Director for the ABT reminisces, “looking back, I thought we had a good idea and a good plan, but I guess I didn’t really understand until we sold out in 29 minutes. Then, it sunk in that what we have is something special. Add to that the way the fans turn out to support us and our sponsors. This is all built around a great group of anglers. We feel like we have 1,100 of the best salespeople out there, and I am very moved by that.” Next year is the 10th year, and we have plans to be even better with additional prize money and a new schedule announcement on May 6th at 10am.

The team of Mitch Mitchell and Candler McCollum claimed their 4th victory on the ABT with 19.96 pounds.  Coming into this event, they decided to spend their practice locating bed fish. They shook off one fish in practice and decided not to catch any more and instead work on locating bed fish.  On tournament day, they returned to the area where they had located fish on the bed. “We started our morning shallow just flipping around the grass in the area where we knew they were. We caught a good keeper quick.” They spent the rest of their day targeting bed fish. “The water depth was very shallow, and we only fished two areas using two baits.” “We caught a total of 10 fish today. Three of the fish we caught today were caught by blind casting to them; the rest were all caught sight fishing for them. We had one fish caught outside the mouth, so we had to release it. We went back to that fish and caught it inside the mouth later.  At the end of the day, we lost a fish with ten minutes to go, but we continued to fish for it and finally caught it! That helped us cull up four more ounces. That wasn’t the difference today, but it sure would have been closer if we had lost it again.” Their total payout with bonuses was $17,000.

The second-place team of Zachary Taylor and Josh Austin caught 19.29 pounds. They have fished the ABT for the last five years and cashed 3 checks in four events here at Weiss Lake.  “Practice for us on this lake has always been horrible, but we had a top ten finish last year. We woke up this morning knowing we were going to catch five; it was just a question of what fish were going to show up. They showed up for us today. We spent practice finding grass and watercolor we wanted to fish on tournament day probably marking 25 different areas. The first spot we pulled into today had 8 boats sitting on it. We got our confidence back when we moved to our second spot and quickly caught our largest fish of the day at 4.61 pounds. We spent the rest of the day with our heads down focusing on watercolor grass and presentation and it worked out.”  The grass they were looking for “was the typical Coosa Riverbank Grass, but the grass was not right on the bank. It needed to be 15-20 yards off the bank with some type of hard structure mixed in, either a wooden lay down or a dock.  We didn’t really catch any fish on the bank; it was more in the scattered grass off the bank. The water depth we targeted these fish in was six inches to three feet.” They gathered their solid limit fishing shallow and moved out later in the day to focus on humps. “We really aren’t shallow water fishermen, and we prefer to be offshore. We located the fish in practice shallow, so we decided to run that pattern. Later in the day we shifted to our offshore pattern of fishing shallow humps with a Shaky Head.” Their payday for this event was $,5750 including the bonus from Garmin and ABT Gear.

Third place went to the team of Bryan Dowdy and Kyle Lewellen with 18.48. This is their fourth year fishing the ABT. The team described their pattern as “junk fishing. During practice we located a few fish on the bed. However, due to the wind and water clarity, we could not see them on the bed on Saturday.  We made a change and decided to stay back away from them and make casts to where we had located them in practice. We targeted these fish using a yellow Magic Topwater early in the morning and caught some flipping soft plastic.” They caught a limit fairly quick using this pattern.  Later in the day, they spent lots of time looking for a larger fish because they knew they needed to cull one more fish to get the win- they never were able to cull. “We call the Tennessee River home, but we have had our better finishes on the Coosa River lakes with 4 top 10 finishes.” For their third-place finish, they collected $4000.

The Top 10 places are below for a complete list of standings visit: https://www.alabamabasstrail.org/weiss-lake/results/

Download and listen to the ABT Podcast on your favorite Podcast app by searching for “Alabama Bass Trail Podcast.”  The podcast is released each week on Tuesday.