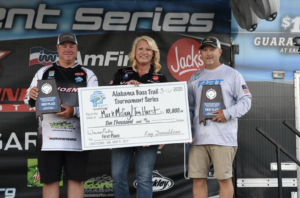 The Alabama Bass Trail North Division is preparing to make stop number four at Weiss Lake. Weiss is well known as the Crappie capital of the world, and in recent years, the ABT anglers have helped draw attention to the great spotted and large mouth population there. The launch site has continued to improve over the last couple of years with added parking, a new ramp and added dock space at the ramp. The team of Mark McCaig and Tim Hurst won last year with a dominating bag of 22 pounds and 6 ounces; almost four pounds over second place. They hope to once again hold up the $10,000 first place check and take home another win.

As Mark and Tim were preparing to head to the lake for practice, they shared, “it seems like the fish are a little bit of everywhere. We don’t want to sound vague, but there are a lot of fish that spawned a month and a half ago, and we think there are fish that have not spawned yet. So, we think you can do about anything you want and you might catch one.”

Last year Mark and Tim found their fish on a “Wednesday afternoon on a section of the lake where we had a few bites. It wasn’t like it was real good; it was just the other areas that we wanted to fish were a long way away. So, we decided to start that morning and work our way up the river. We started getting a few bites not far from the boat ramp and ran with it.  We said okay, this is what’s happening with the fish and we built on that throughout the day.  I think last year the fish were further along then they are this year too. I didn’t feel there were very many fish still spawning then. I felt last year the fish were all postponed fish and they were leaving and swimming out of those areas.  This year there’s not a lot of fish doing any one thing, but there’s a lot of fish doing different things. It makes fishing different because, you can actually get a bite doing a lot of different things. It’s really hard to pattern them this time of the year around here.”

Looking forward to this event Tim shared, “last year we had an okay practice with no idea what we were going to run on tournament morning, and it is kind of that way this year.  There are very few times going into an event that Mark and I feel we are going to really catch them. Last year we just sat down in the right spot and caught two big ones quick and made it a little bit easier the rest of the day.”

The team feels like there are a few variable to consider for the weekend: “there could be shad spawn still in place this time, we don’t know what the weather’s going to do- it may be a little cooler and the water has been really high. It’s just now settling back down, so we hope things will be a little more normal and think Saturday is probably going to be the best day we’ve had to fish around here in a while.  It will happen somewhere… somebody’s going to land on them,” said Mark.

Weiss Lake is the start of the Coosa chain of lakes known for their spotted bass. Just like the other lakes in the chain, current and grass play a factor here as well. Anglers really have many options when fishing a pattern that suits them best.  The shore line is full of boat dock providing anglers the opportunity to fish the bank, and the lake also has a river channel that bends throughout the lake providing the offshore angler a pattern that would fit his style as well.

For teams headed to Weiss Lake for the first time, Mark and Tim said “find an area of the lake you like to fish and fish it. Let the lake tell you what to do. If you have to do a lot of running around, you are probably going to find someone else fishing the same pattern ahead of you. Lots of teams will catch a lot fish in this event, but recent weights haven’t shown what can be caught here.” They expect it will take bag over 18 pounds to win this event.

All friends and family are welcome to attend this event, bring lawn chairs and practice social distancing. Everyone can watch the live weigh-in and over 4 hours of on-the-water live coverage on the ABT Facebook page and the ABT website. The launch and weigh-in will be held at Leesburg Landing  1085 Riverside Street in Leesburg, AL.