Posted on October 25, 2021 by ABTTournamentSeries 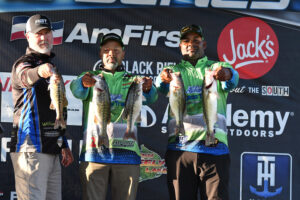 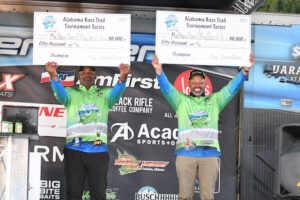 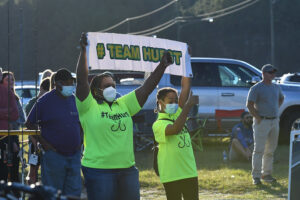 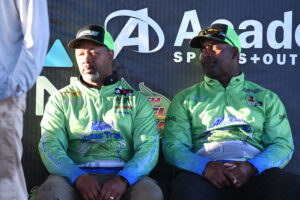 October 24, 2021 – Jasper, Ala, Walker County and Lewis Smith Lake was the host for the 2021 Alabama Bass Trail Championship. The top teams from the North and South divisions qualified through five regular-season divisional events to fish the two-day, no-entry fee event. The purse for the ABT Championship totaled $100,000 with a grand prize of $50,000 in cash going to first-place team. First place also claims full bragging rights as the best of the best bass fishing team in the southeast.

After two days of official practice, teams were ready to get to work on day one of the event on Friday. Anglers found the lake conditions to be abnormal for this time of year. Typically, in late October, the water temps have really cooled off which normally pushes fish to the shallows chasing bait. The fall pattern at Smith Lake is also known for schooling spotted bass that can be found in a blueback herring feeding frenzy. Smith Lake is much different than other lakes on the ABT with most of the lake being very clear and very deep. Anglers often break the lake down into three sections: Ryan Creek, Rock Creek, and the Sipsey Creek. Teams can spend the whole day just fishing one of these areas and often have little or no fishing pressure around them providing teams the opportunity to fish their strengths. Smith Lake does have a slot limit that requires all bass between 13-15 inches to be released. Teams have to learn to navigate the slot limit and do their best to catch as many as they can over the slot limit to really have a solid weight.

The day one leaders were Jason Cannon and Trent Surat. Although they caught a limit quickly, their day started really slow. With only one fish over the slot limit, they pulled up on a point about 1pm and were able to cull out that early limit to get them the 13.77 pounds giving them the lead on day one. Most of their fish were caught using a Green Pumpkin Baby Brush Hog on a Carolina rig mixed in with a shad-colored fluke and a green pumpkin shaky head. They mixed up the deep and shallow water patterns focusing mainly in Ryan creek. Working through about 50-60 spots, they caught roughly 50 fish on day one and started day tow as the leaders. The team shared, “we went out with the expectation of having another afternoon bite, pulled up on our first spot and went to catching them. We caught several and quickly got our limit. After about 9 in the morning, the bite was gone, and we didn’t really get an afternoon bite. We needed the wind on day two, but we didn’t really get any like we did the first day. We were mainly fishing wind-blown points up close to the park in Ryan creek.” Overall, they felt they had a really good event coming up just a little short in the end. “We exceeded our expectations in this event. We really only caught a couple overs in practice and just put our heads down and went fishing both days.” Finishing in 2nd place overall with 23.65 pounds and a $10,000 check and a regular season 4th place in points allows them the chance to represent the ABT in the B.A.S.S. Team Championship at Lake Eufaula and fish for the opportunity to go to the Bassmaster Classic. 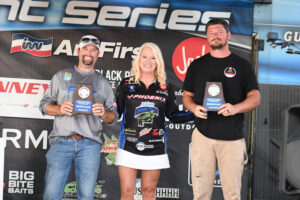 The team of Matthew Hurst and Roy Hurst Jr., known by their friends and family as #TeamHurst, weighed in 11.56 on day one landing them in 13th place. They spent the first day fishing bluff walls in Ryan Creek primarily targeting walls with chunk rock and deep water. They also fished shallow boat docks near deeper water in the afternoons. With the day one weights being really close, #TeamHurst was only 2.21 pounds out of the lead, so they approached day two expecting some of the teams ahead of them to slip up some. Going into day 2 with the mindset to “fish big,” they started in the same spot as day one where they caught a very nice size keeper over 3 lbs. When they put it in the box, they said to each other, “with this fish, we know we caught the day one leaders. Oh man! We might have something special here.” They spent about two more hours working on getting the five bass limit. About 10:30, they had their limit and felt they were on the right path. They continued to rotate between their four spots two of which seemed to hold the fish for them. The bluff wall was in 50 feet of water, and they used a Zoom green Pumpkin Trick worm with a 3/16 oz Picasso Shaky head on 12lb Seaguar Invizx on a med-heavy rod 3/8 oz Predator live rubber football jig with a Zoom Ultra Vibe Speed C raw trailer in watermelon candy on 17lb Seaguar Abrazx. After casting, they let these baits sink down slowly. The bite was really slow and most of the time the bites came on the fall. On day two they caught around 20 keepers allowing them to cull up to 13.56 pounds giving them a two-day total of 25.12- more than enough to capture the lead all the way from 13th place.

Day one top ten leaders were held back to weigh last on day 2 leaving #TeamHurst as the last team to weigh in before the leaders came across the stage. After they weighed-in they were seated in the Phoenix Boats hot seat while the other teams crossed the stage with the hopes to knock them off the hot seat. As team after team continued to fall short, #TeamHurst began to feel the reality sink in. When the final team to weigh-in was unsuccessful at beating their total #TeamHurst was all smiles expressing thankfulness for their family support and how honored they were to have done so well against such a great field of anglers. This was the first year for #TeamHurst to fish the ABT, and they took home over $50,200 in cash and bonuses and the title of ABT 2021 Champs. They said the key to winning this event was “consistency.” They were the only team that was able to have a good weight on both days.

The 3rd place team of Tyler Smart and Bret Harrell had a two-day total of 23.60 and took home $5,000. They were in 6th place after day one with 12.16 pounds and spent their time in Rock Creek targeting fish in pockets early in the morning using a buzzbait, a River2Sea Rover in a shad color and a Whopper Plopper. In the afternoons, they would work their way back out towards the main creek channel using a homemade shaky head with a green pumpkin Zoom Trick Worm. They felt the key for them was targeting fish in the shade using the topwater. On day two they ran the same pattern but found the shaky head bite really went away, so they went back to the pockets and caught a few more fish using the River2Sea Rover. “The wind really changed today and blew from a direction that hurt us. When you are throwing a 3/8 oz weight, it’s hard to feel the bite in the wind.” 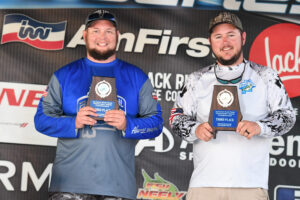 This concludes the 2021 Alabama Bass Trail North and South Division. 19 Teams are headed to the B.A.S.S Team Championship on Lake Eufaula, with the hope to hold onto the trophy one more year and send another angler to the Bassmaster Classic.

The top ten standings are below for a complete list see: https://www.alabamabasstrail.org/tournament-series/lsl-results/ 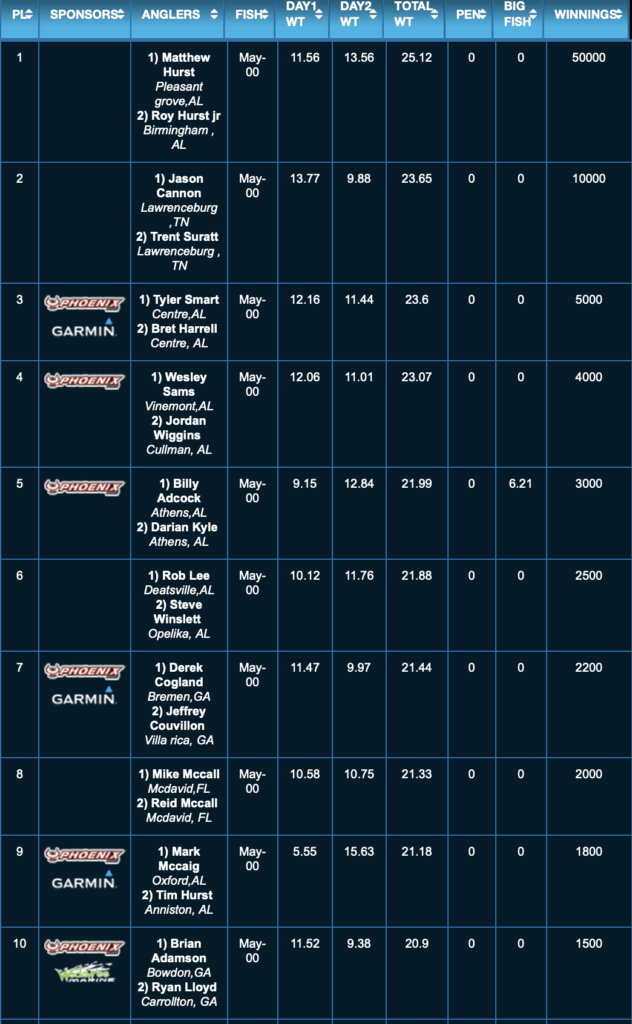 Download and listen to the ABT Podcast on your favorite Podcast app by searching for “Alabama Bass Trail Podcast.” The Podcast is released each week on Tuesday and will feature the winners #TeamHurst this week.