Shawn and Davy Lolley Take The Win On Weiss Lake 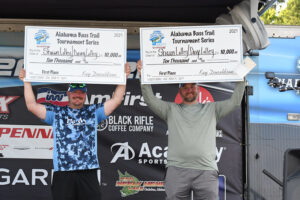 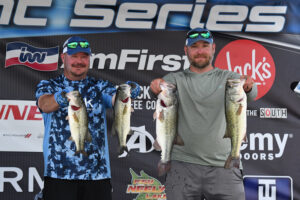 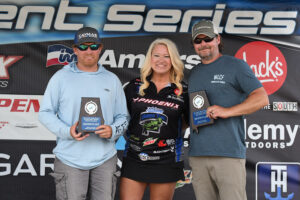 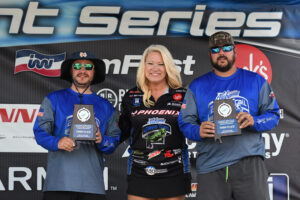 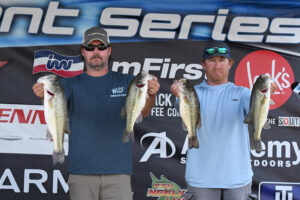 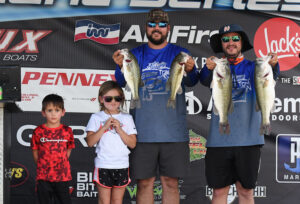 Leesburg Alabama- Alabama Bass Trail North Division teams have passed the mid-way point in the season and the AOY points race is heating up. Teams are doing their best to stay as high as they can in this event to hold on to their lead or move up the leader board. This event saw a few teams make some big moves in AOY points with some teams moving up and some teams falling down. At the end of the day it was the team of Shane Lolley and Davy Lolley holding up the $10,000 first place check for the win on Weiss Lake.

Shawn Lolley and Davy Lolley said practice was tough. They spent four days trying to prepare for this event and find a pattern that would produce the bites needed to win. They were able to find a few fish on a square bill and later in the week found fish up shallow in the grass swimming a jig.

On tournament day the decision was made to head to the Cedar Bluff area and target fish in the grass in water less than four feet. They started in an area they “knew well and have fished the last four years.” The plan for them was “to swim a jig all day.” They both know this is a very popular pattern on the lake and can produce some good fish this time of year. “The fish were in very small areas, and it was a grind to find them.” They felt they had to stick with it though to be able to catch the quality fish needed to win.

Because of their history fishing this area, they felt like they “would have little or no other fishermen in the area,” and the only thing they worried about was pleasure boat traffic. Having the area to themselves allowed them the time to fish the area and not have to share fish with other teams. Early in the morning they lost a fish in the five-pound range they feared was going to hurt them. However, they were able to recover from that loss and boat two fish over five pounds that brough their total to 18.29 pounds

The “sim a jig all day pattern” worked for them using the same bait in two colors a; Dirty Jigs No Jack Swim jig in with a Zoom twin tail trailer white and the same jig in black and blue. The bigger fish came off the black and blue jig. The water clarity was stained to clear. They used 65 pound braided line to help them get the fish out of the grass and to the boat.

They were in 14th place in AOY points coming into this event and moved up to 3rd place which was a huge goal for them. They want to make the Bassmaster Team Championship this year which is held on Lake Eufaula.

The second-place team of Bradley Jones and Broox Goza spent two days practicing. They found the fish to be in what they believed to be a “post spawn pattern.” This normally causes the fish to be moving out of the shallows and headed to deeper water. They were expecting to be able use that to their advantage and catch fish as they transition out to the deeper water. However, the weather really warmed up on tournament day and seemed to have caused the offshore bite to go away. So, they moved up shallow and fished bank structure including docks, wood, grass and anything else along the shoreline. They would start in an area and “it seemed as soon as we started we would get a good bite and then we would fish for 45 minutes in that area, move and the same thing would happen again” Throughout the day they continued to move and continued to catch fish all over the lake.

They spent the day using a variety of flipping baits including hand tied jigs and soft plastic beaver style baits.  They caught twelve keepers and culled up to 17.80 pounds and were able to stay in the top five in points moving up to second place- only one point behind first place headed into the last event.

The Georgia team of Justin Buckles and Chadd Jones have looked forward to this event from the beginning. They said fishing the other events for them was “just trying to survive.” Justin and Chad both “grew up fishing dirt shallow here and at Neely Henry so they felt ready. They targeted two creeks on the Georgia side of the lake. “Based on practice, we knew the fishing was tough and we needed to get away from the crowd to find areas all to ourselves.” They made a long 45-minute run upriver to the Georgia side and targeted two areas.  The “first spot was where we shook off two good fish in practice and we knew if we made the long run, we could get there and have a chance to catch them. We stopped there first and caught a good fish.” After that fish catch, “we moved to our second spot and spent the rest of the day there.” They finished up their limit here and culled up to 17.77 pounds. It was at that point they decided it was time to make the run back. They knew the run would take some time and how difficult navigating that river channel can be, so they gave themselves plenty of time to get back since they felt they had a good enough bag to finish in the money.

Like the other teams they also spent the day swimming a jig using a ¼ oz Dirty Jigs Swim Jig in Tennessee shad with a white Strike King Rage Craw Trailer and the same Jig in Black and Blue with a Strike King Rage Craw trailer in June Bug. They also used a black and blue and a custom buzz bait mixed in for a reaction bite.  They noticed in practice the darker colored jig seemed to work better. “It has to do with the watercolor and the shadow it cast. The darker jig also works because the shad spawn seems a little off due to the cooler nights we have been having, and the blue gill have pushed up to the bank feeding on the bass fry that have also spawned later. The bass are protecting the beds from those blue gill.”

Top ten standings are below for a complete list see: https://www.alabamabasstrail.org/tournament-series/wel-results/ 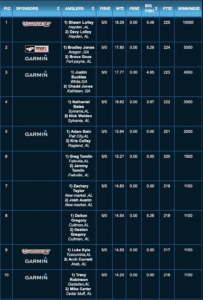 Download and listen to the ABT Podcast on your favorite Podcast app by searching for “Alabama Bass Trail Podcast.”  The Podcast is released each week on Tuesday. This week will feature the winners  Shawn Lolley and Davy Lolley.