Shane Powell and Tim Fox Claim Their Second ABT Win 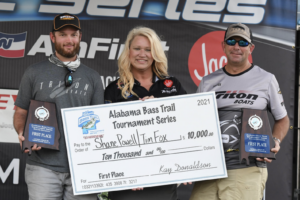 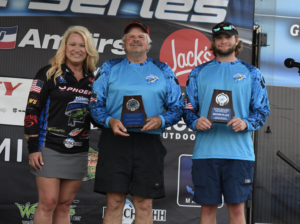 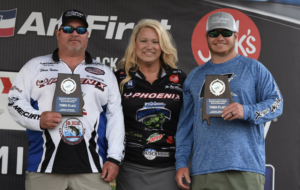 Eufaula, AL March 27, 2021 – The Alabama Bass trail South Division recently held their second stop at the Big Bass Capital of the World on beautiful Lake Eufaula. Recent storms and heavy rains across the state had the lake more stained and muddy than usual but that didn’t seem to bother local favorites Shane Powell and Tim Fox who fished their way to over $17,000 in winnings and contingency money.

Shane and Tim, who won this same event in 2020 spent their practice day “checking” on potential spawning areas on the south end of the lake. “The lake has been fishing tough this year and we were hoping we could get to 20 pounds” says Powell. “On our first stop we caught a big fish that really set the tone for what we felt like we needed to be doing.” Fishing a number of different spots, “You would pull up on a spot and catch a big fish and then there would be a number of smaller fish there too.” Said Fox.

Weighing in a five-fish limit of 23.95 pounds, the pair relied on a ½ ounce chartreuse and white War Eagle spinnerbait and a simple 3/8-ounce white swim jig. When asked about their recent success on the lake, Powell stated, “we have been really blessed.” “With all the pressure this lake has had in the last year or so, as well as the lake used to have hydrilla and the weights were much bigger. With most of that hydrilla gone, we felt 20 pounds would do well and we feel fortunate we were able to have the day we had.” When asked about the upcoming Bassmaster Team Championship scheduled for December on the lake, Powell was quick to say, “It is most definitely on my calendar, no doubt about it.”

The second place team of Jimmy and Jared Simms ended the day with a 21.21-pound limit worth $5,000. Keeping things simple, the father/son duo fished white 3/8-ounce spinnerbaits in less than three feet of water. “We practiced on the South end for a day and the wind hurt us, so we turned left out of the creek and made a long run up the river,” says Jimmy. “We fished 5 or 6 spots in water that was slightly stained, and we just weeded out the little ones to the limit we had.” Catching over 30 fish on the day, the pair also earned the Mountain Dew Big Bass of the Day with 5.97-pound lunker.

Third place team of Shane and Brandon Horton brought home $4,000 thanks to a 19.65-pound, five fish limit and a 5.38 big fish. Not wanting to give up too much detail, the pair worked a “400-Yard stretch” of water “a few miles north of the boat ramp.” “Our first stop did not pan out for us like we thought it would. On our second stop we caught a 4-pounder and small fish, we left to check another spot and came back to where we were and stayed there all day long.” said Brandon. Unlike the teams ahead of them, spinnerbaits did bit play into their plans, “we used 6’10” Heavy, 7’3” Medium Heavy and 7’10” FX Custom Flipping sticks with 60-pound braid and several different soft plastics to catch our fish today” explained Shane, “we have more events coming up here and we don’t want to divulge too much, but we had a good day.” 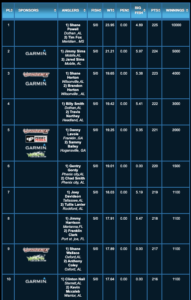 Download and listen to the ABT Podcast on your favorite Podcast app by searching for “Alabama Bass Trail Podcast.”  The Podcast is released each week on Tuesday. This week podcast will feature winners Shane Powell and Tim Fox.