Posted on June 21, 2021 by ABTTournamentSeries 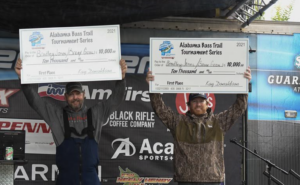 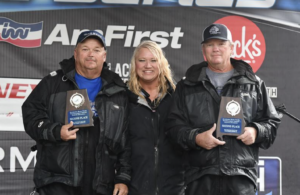 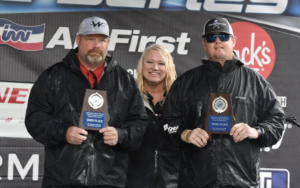 The Alabama Bass Trail North Division concluded its regular season on Lake Neely Henry. Just like all regular season events teams were fishing for the $10,000 first place check, and with this being the final event, the focus was also on the AOY points race. Teams hope to finish in the AOY top 75 to make the ABT Championship with the top 8 teams qualifying for the BASSMASTER Team Championship. Going onto this event, the overall AOY race was very tight with only one point separating first and second.

The team in second place AOY was Bradley Jones and Broox Goxa. They left the ramp Saturday morning focused on winning the tournament. Bradley said, “I have put a lot of time in practicing six days the last two weeks. My mind has been on AOY. When we got to talking about what we were going to do last night, we had a lot of areas where we were getting bites, but we didn’t know the size because we weren’t catching them in practice. We just made our minds up last night that we were going to fish like we were trying to win thinking that would be our best chance at winning AOY.

Broox had a really good practice on Friday giving them hope they could win on what they found, but they knew it would take sunlight for that pattern to play out. The weather moving through promised little chance of sunlight. However, they knew that the big fish were in the area and it would just take some changes to get them to bite. One change they made was a bait change to a frog. Bradley said, “the water has fallen a foot in a week and even more overnight which drew the fish out of areas where they hadn’t seen a bait in months and set them up to be caught today.” The weather and falling water was a key to them winning this event. At 9:00 they caught their first fish a 4.90 with one over three pounds soon to follow. They continued to work the area catching another 4.90, finishing out their limit and even culling out a three pounder. This put their winning bag at 18.78. They spent the day working through about five different areas with two key baits: a flipping Jig and Frog.

Bradley expressed how relieved he is that it’s over saying his “mind has been spent on this.” They have had “two second and two third place finishes, so it was time for them to win one.” They were excited to come away with the win today, take home AOY and are looking forward to the BASSMASTER Team Championship on Lake Eufaula where Broox grew up. “It’s time we start thinking about it because we are normally in a deer stand or a duck blind that time of year.”

The second-place team of Benjie Seaborn and Jonathan Seaborn weighed in 18.22. They felt like they had a really good practice with most of their time spent down river flipping isolated mats. They “don’t like to catch them in practice so it is hard to tell the size of the fish.” On tournament morning they kept with the same game plan from practice and headed south. They started catching fish and realized they were on a good bag. They continued catching a bunch of fish throughout the day with15-20 fish over two pounds. The key baits for them were “typical Coosa River baits- a flipping jig and a craw.” They took home a $5000 paycheck for their day of fishing.

Eric Morris and Jeff Kitchens finished in third place with 17.20. Eric said, “this is Jeff’s home lake, so he practiced and found the fish saying we are either going to hero or zero.”  They fished one particular spot described as a shallow area with cover next to deep water with some grass and wood mixed in with hard bottom. Eric said, “we had to fish, catch a couple, let it rest then fish it again. We really had to just wait it out all day and keep working it.” The key baits for them were soft plastic flipping style baits. The Googan Karckin’ Craw was a key bait that really produced some of the larger bites. Their winnings totaled $4000 plus a $1000 Wedowee Marine Bonus that Eric awards to each Wedowee Marine Customer who finishes highest in an ABT event. In this event he gave $500 to Jeff because he purchased a boat and $500 to the local animal shelter.

The top ten standings are below for a complete list see:https://www.alabamabasstrail.org/tournament-series/nhl-results/ 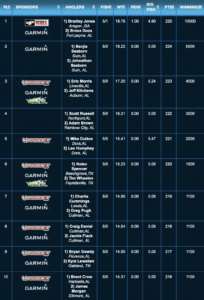 Download and listen to the ABT Podcast on your favorite Podcast app by searching for “Alabama Bass Trail Podcast.”  The Podcast is released each week on Tuesday. This week will feature the winners Bradley Jones and Broox Goxa.