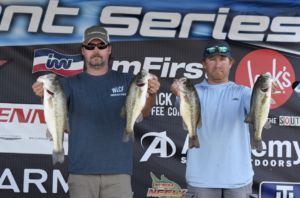 Gadsden, Ala- The final stop of the Alabama Bass Trail North Division is on Neely Henry Lake.  Neely Henry is a tight race for a lot of teams looking to make the top 9 in AOY to move on to the BASSMASTER team Championship. The top 75 in AOY also move on to the ABT Championship on Lewis Smith Lake in October. Neely Henry is the second lake on the Coosa River just down river from Weiss Lake where the last event was held. The team of Bradley Jones and Broox Goza took second place in that event with 17.80 pounds. They had Weiss Lake and Neely Henry circled on their calendars as events they wanted to do well in.

Bradley and Broox have really put some work into these last two events. Broox lives on Weiss Lake and Neely Henry is Bradley’s home lake. They feel that the lake is not where it normally is for this time of year with fish really scattered out. Typically this time of year, fish should be out deeper headed in to the dog days of summer and can usually be caught on the river in the current. However, lately they have not been easy to pattern.  “The numbers aren’t really out deep; you might catch one here and one there but not enough to keep you really going.” Broox prefers to catch the fish deep, but Bradley “prefers them to be in the dirt and current related, but they just aren’t there either- there is no bite that is really consistent.”

They have not had one event this year where they left the ramp feeling it was going to be their event to win. They worked “really hard to survive and get back home at these last two events.” Currently in AOY they are one point shy of the lead behind the team of Jason Cannon and Trent Suratt sitting at 825 points. They are out to win this event and have spent time on the Tennessee River lakes trying to fish one area instead of running all over the lake. A key moment for them this year would have to be Lake Guntersville when they needed to cull out two more fish but were having some motor trouble so they had to look for help to get their fish back to the weigh in. While waiting for help, they pulled the cowling on the motor and found a fuel line loose and zip tied it back on. Instead of heading back to the ramp 30 minutes early, they fished a little longer and culled out those two fish that made the difference in them sitting in second place today with a shot to win AOY on their home lake.

Neely Henry, like other Coosa River lakes, is well known for a few baits- one of those being a swim jig in the grass. Another baits they feel might be effective this weekend is “something to flip in the grass like a creature bait.” They also said based on how tough it had been lately, they “wouldn’t rule out a shaky head being a very productive bait this weekend.” The whole lake is in play for this weekend, and it wouldn’t surprise them if a first place bag was caught at the Weiss Lake Dam and a second place bag caught at the other end of the lake at the Neely Henry Dam. it They predict it should take 16-17 pounds to win this event. If a team catches two big fish, it might be 18, but if a team has 19 pounds, they will win this event no doubt- it’s going to take that five to six pound bite to get that kind of bag though.

Their advice for the team new to the ABT and fishing Neely Henry for the very first time is to “fish their strengths. Don’t go out and try to fish someone else’s pattern or strengths. This lake has lot of areas where all teams can find areas they like to fish that meets their style. That’s exactly how we approached Pickwick. Broox had never been there but we found water that fit our style and used it to our advantage.”

This weekend is setting up to be a real shoot out. With the AOY race as tight as it can get, 75 teams are looking to make the ABT championship and 9 teams fishing for the BASSMASTER TEAM Championship. All eyes are on this event. This should one of the best events for ABT fans to watch this year especially if you like to watch the competition heat up. Be sure to tune in and watch live throughout the day.

All friends and family are welcome to attend this event, bring lawn chairs and practice social distancing. Everyone can watch the live weigh-in and over 4 hours of on-the-water live coverage on the ABT Facebook page and the ABT website. The launch and weigh in will be held at Coosa Landing 1 Huff Drive in Gadsden, AL.