Posted on May 13, 2019 by ABTTournamentSeries 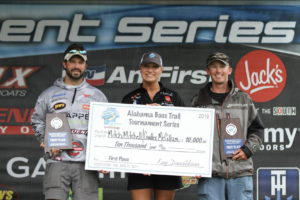 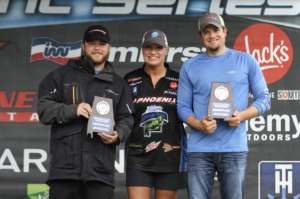 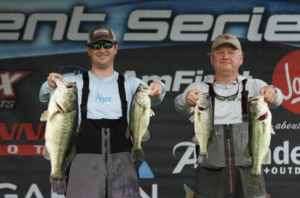 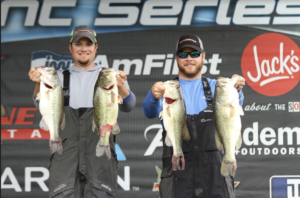 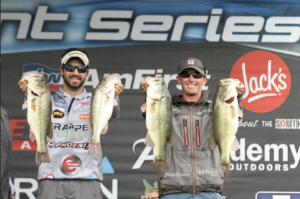 May 11, 2019 – Florence, Ala. – Pickwick Lake has been a steady performer whenever the Northern Division of the Alabama Bass Trail make a stop at Florence Alabama’s McFarland Park.  Typically, the winning weight at Pickwick will be somewhere between 20 and 25 pounds, and it will take 14 pounds to get a paycheck.

May 11, 2019 was not a typical Pickwick Lake day. The winning weight was much higher, and it took nearly 17 pounds to get the last paycheck spot.

No strangers to the ABT podium, the team of Mitch Mitchell and Candler McCollum produced a stellar 29.04-pound limit of Pickwick Lake largemouth and walked away with their third career ABT victory and the first place prize of $10,000.

The pair said that they felt this event in particular was their best chance to move back into the winner’s circle.  “We have been waiting for a tournament at Pickwick that lines up with the fish just moving out to their postspawn haunts, and today was that day,” they said.  “We had 40 or 50 small schools of quality fish marked, and hit 20 of them to get out limit; it feels really good to be holding another one of these trophies.”

They reported making the long run to in sight of the Pickwick Dam and fishing offshore current breaks with moving lures.  “We caught all of our fish on 6-inch Zoom swimbaits on a jighead and Strike King 10XD crankbaits,” they said.  “We only caught about 20 fish, but they were all the right caliber of fish; it was a great day.”

Nolen Spencer and Jonathon Reese finished the day in second place with a limit weighing 26.73 pounds.  The former ABT Northern Division winners said that they too made a long run and fished for postspawn fish.  “We ran to just past the State Line and caught fish off of three spots within three miles of each other,” they said.  “We caught our fish on a variety of lures, but our main ones were 3/4-ounce Mean Mouth Lures Football Jigs and Big Hammer Swimbaits on jigheads.  We did all we could, and got beat by a huge bag; we feel good about our day, and possibly took over the lead in the points race, so we’re happy.” The pair earned $5,000 for their performance.

The third place tea of Jake and Michael Gipson produced a limit of 23.44 pounds to finish third and take home to $4,000 payday.  Their limit was anchored by a remarkable 10.33-pound Pickwick Lake largemouth that took home the Mountain Dew Big Bass $500 bonus for being the largest bass of the event.

The Northern Division of the Alabama Bass Trail hits the water next at the Neely Henry Lake on June 8.

The Top 10 Standings are below, for complete standings, visit: https://www.alabamabasstrail.org/tournament-series/pl-results/