McAvoy and Butts Take The Win At Lake Guntersville 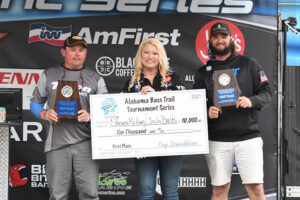 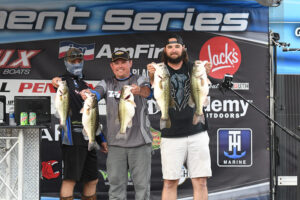 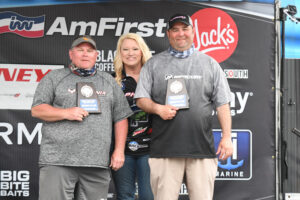 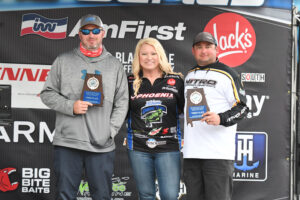 Guntersville, AL March 13, 2021- The Alabama Bass Trail North Division stop number two was won in perfect Guntersville fashion. It is no secret that fishing bridges can be a very productive pattern. Teams often say you can live and die on the bridges. The plan for Steven and Josh was to do just that and it paid $10,000.

Steven and Josh said last year we had a tough practice here and got beat by others fishing on the bridges.  This year’s practice wasn’t much different; we didn’t want to get beat again, so we decided to fish the bridges this year.  They were boat 99 with a plan to head to the Brown’s Creek causeway bridge. When they pulled up, there were only two Crappie fishermen there. Shocked that no one else was there ahead of them, they stopped.  Josh said when he saw no one else was there, “we knew then it was game over.” They caught a limit by 9:30 and continued to catch fish all day. Fishing the bridges is a slow pattern. “Most people leave after not catching fish quickly, but you have to commit to stay all day”

The key for them was ¾oz. True Bass True Lock jig head with a 6/0 hook paired up with a Megabass Magdraft Freestyle in White Back Shad six inch and 20lb P-Line Fluorocarbon.  The fish want this bait really slow, and the feeding pattern comes in flurries.  “The fish stage up between the bridge pilings and the face the current.” They set their boat on the down current side of the bridge and cast between the pilings up current. Kyle said, the “bass want a really easy meal. On their Gamin Live Scope they could see when the bait fish came through the bridge, and they could almost predict when they would get a bite.”  They caught 28.28 pounds and took home the $10,000 first place price along with the Garmin $500 bonus.

The second place team of Seth Skalnik and Ronald Rawlins, said practice was good and they located some really good fish around the BB Comer bridge area.  Those plans all changed at blastoff when a fog blanket covered the lake to the north. Realizing making that 35 mile run was going to have to change, they decided to fish main river around Goose Pond. “We felt the fish were still coming up in that area to get ready to spawn.” When they arrived, they quickly went to work and caught a keeper quickly followed by the first of two 7-pound fish. Focusing on the edge of grass lines headed into spawning areas was their pattern. The second 7-pound fish came in 10 feet of water in the grass on a Strike King Shadalicious Swim bait. They had a limit very quick and only culled up one other time later in the day to fill the 23.15 pound bag. Seth said, late in “the day they lost a 5 pounder” that could have made this a lot closer. Their key baits were a Jackhammer in craw color, War Eagle white spinnerbait and Strike King Shadalicious Swim bait that helped them claim second place and $5000.

Adam Bain and Kris Colley finished third. Adam shared that practice was kind of tough for them fishing up shallow around docks, trees and grass. Late Friday, in practice, he found two fish on a bed and decided that was where they would start the tournament. They carefully made the run upriver in the fog to Waterfront and found those two fish still on the bed. First, they caught a 4- pound fish and then caught a 7 pounder. Those fish were caught on a green pumpkin tube Texas rigged. They spent the rest of the day “just fishing everywhere” trying to get a limit running all over the lake.  Finally, 20 minutes before check in, at 2:55 they caught the biggest fish of the tournament- 7.51 pounds, also on a tube, to finish out their limit of 22.61 earning them third place and $4000.

Download and listen to the ABT Podcast on your favorite Podcast app by searching for “Alabama Bass Trail Podcast.”  The Podcast is released each week on Tuesday. This week podcast will feature winners Steven McAvoy and Josh Butts.