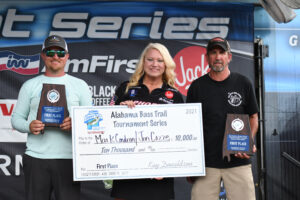 Camden Ala- The Alabama Bass Trail South Division’s fourth stop made its way down to Millers Ferry on the Alabama River. This event was rescheduled from Logan Martin due to construction, however, anglers found themselves welcomed with open arms by the city of Camden and a brand-new launch facility at Bridgeport Landing.

Bridgeport Landing has been in the works since 2015 and is finally a reality. This facility provides better fishing and boating along the along the Alabama River. Gov. Kay Ivey was present at the weigh in to see the new and improved facilities. She spent time with anglers and ABT staff to see first-hand what takes place at an ABT event.  Earlier that day, she also cut the ribbon on a new T-Pier at Roland Cooper State Park in her hometown of Camden! “This Park is a jewel of the Alabama River, and this development will certainly attract more visitors to the area to enjoy it.” Twitter @governorKayIvey 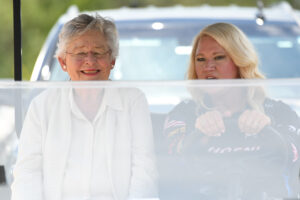 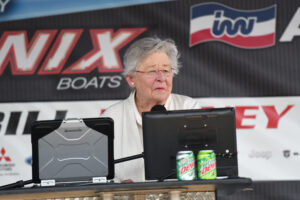 For many Anglers this was a first time visit to this area of the Alabama River. The team of Mark Condron and John Cozze are from the middle Tennessee area and fish both Divisions of the ABT. The team shared they saw the lake for the first time in practice on Friday. They said practice was “pretty bad- we caught one decent fish and a couple small ones.  We found some stumps and grass and a lot of visual stuff that we would probably want to fish, but we never really got on anything in practice.”

On tournament day they felt like they didn’t have anything much but the plan was to go out and give some of those areas another try. They loaded the boat with rods rigged up for flipping, swim jigs, spinning rods, and top water ready to do whatever it took. They started in a pocket with hopes to catch some fish on top water based on the weather conditions and felt like the spots might be active. It didn’t take them long to figure out what they were doing wasn’t working.

John sat down, looked at the map and found a ledge with a channel run out of it, so they graphed it to see what was there. They described this area as a “point with a little skinny ditch separating the ledge from the bank with the other side of the ledge leading off into the main river. It was shaped kind of like a peanut. Basically, the fish could get out of the current and used the ledge to do that. Later, we found there was also a brush pile on there. The fish were basically moving back and forth between the brush pile and the ledge. The fish were in 15-22 feet of water with the boat sitting in 30 feet.”

They fished the area with “small baits to get a limit using a 5 inch Senko Green pumpkin they cut down to 3.5 to 4.5 inches. We knew we needed to work the area slowly and just get a limit.” They quickly sacked up about 14 pounds.

The key for them was the Gamin Panoptix. When they moved up on the ledge, they could quickly see exactly where the fish were. The fish moved around a lot, so using the Garmin helped them pinpoint their cast to the fish.  There was no other way they could have found these fish without it. It was easy to see the fish moving up and down the ledge and using the cover to stay out of the current.

Once they got the limit they upsized their baits some to include; Bass Reaper Drop Shot, Power Bait MaxScent Hit Worm in Green Pumpkin 3/8 shaky, Drift Wood 5 inch Swim Bait in Sun Drop. This helped them cull up about 12 times, and later in the afternoon, the 3 final cull put them at 17.98 pounds- enough for first place and $10,000. The team said it was a “big surprise after the practice they had and if you had asked them their chances of winning that morning, they would have said no way.” 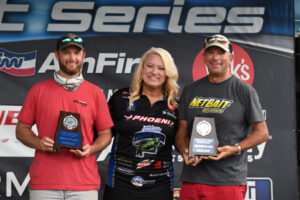 Tim practiced Friday morning and said the current was super strong and the water was high, so he flipped the willow bushes that were in the water and places with matted over stuff and found a few really decent bites. On Saturday they rode around looking for similar stuff finding mainly eddys that fish could get behind to get out of the current. They also found one little back water area where they would hopefully catch a few early.

On tournament day they started in the backwater area to try and catch a few fish on a swim jig. “We were an early boat draw, so we thought we should go in that back water area and fish since we were close to the boat ramp. We planned to fish until we couldn’t hear any more boats running and then head to the river once it calmed down a little from all the boat traffic. We figured if we went out there first we would just be washed away by the wakes. We quickly caught three in the back water area which really helped a because we had to go really slow out on the river, and the three in the box helped our confidence”

The rest of the day was spent on the river hitting probably 20 spots using swim jigs and beaver style baits like a Big Bite Baits Fighting Frog in black and blue. They were targeting fish in the current breaks, fishing wood and flipping matted areas of grass to trigger a bite.

Shane and Tim said this was a really good finish for them. They have had their eyes set on the BASSMASTER Team Championship on Lake Eufaula since it was announced and needed good finishes in these last two events to qualify. It is no secret that Lake Eufaula is Shane’s home lake, and he is really hoping to make the top 9 in AOY. This week they moved into 3rd place with 805 AOY points with 9th place currently at 760. Shane said it would be a dream to make the Bassmaster Classic. 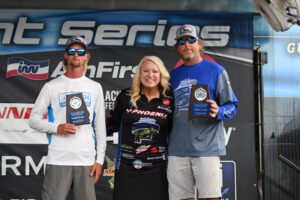 The third-place team was Mathew Spurlin and David Conner who caught 16.39 pounds of Alabama River Bass and landed a check for $4000 plus a Garmin highest finisher Bonus of $500 for a total payday of $4500. They are currently 44th in AOY points are are looking to make the ABT Championship on Smith Lake in October.

The final stop of the ABT South Division will be held on the Alabama River- Cooter’s Pond September 18, 2021 where AOY leader will be crowned.

The top ten standings are below for a complete list see:https://www.alabamabasstrail.org/tournament-series/lml-results/ 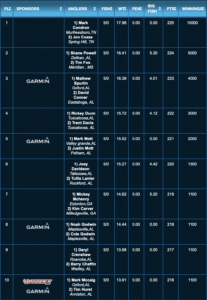 Download and listen to the ABT Podcast on your favorite Podcast app by searching for “Alabama Bass Trail Podcast.”  The Podcast is released each week on Tuesday. This week will feature the winners Mark Condron and John Cozze.