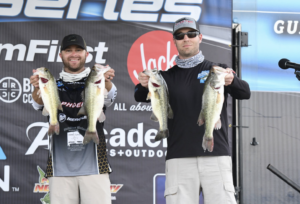 Lay Lake is the third stop for the South Division of the Alabama Bass Trail. The points race is at the forefront of anglers’ minds at this point in the season. The team of Cody Farr and Rusty Mask is currently in third place with 421 points, just 19 points shy of first place for Angler of the Year. Teams want to make the top 8 in points to have the opportunity to attend the BASS Team Championship on Lake Eufaula later this year with hopes of qualifying for the Bassmaster Classic.

When asked how the lake will set up for this weekend and what patterns will be in play Cody and Rusty shared, you will see “a little bit of everything: fish spawning, Shad spawning, and brim beds will be coming on very soon as well. There will be a full moon this weekend, and of course we have to factor in the little cold front and rain coming in. So, it’s going to be interesting weekend.” With all those changing conditions anglers will “have to be versatile on the lake and plan to just make adjustments throughout the day just try to get up to the weight to win.”

There will be some teams that will have it dialed in, could knock it out in 30 minutes and be done for the day. Those teams could be fishing the shad spawn or may have located some bedding fish and have a good boat draw. “Unfortunately our boat number, if we calculated it right, may be towards the end of the pack, and that may not be as beneficial for us.”

Cody and Rusty had a slow practice stating, “we both practiced last weekend a little bit and never really got anything major but didn’t mess with a lot of our areas that we would fish in the tournament. So, we’re hoping that helps a little. Recently, it “has taken some really big bags to win, but if you notice, it drops off pretty quickly after the first six or eight teams.”

There will be three baits that anglers will probably have in their arsenal. “It is the Coosa River, so there’s always going to be grass involved. When fishing the grass, people are going be using a topwater frog or a swim jig. Every time you ask somebody about Lay Lake they mention a swim jig.” They reluctantly said, “and then that dang shaky head… for whatever reason it works. Of all three baits, you can catch big ones on, it’s a shaky head. Neither one of us care too much for it, but we will have one tied on.

This weekend anglers will be targeting the ever famous hard fighting Coosa River spotted bass. These fish are known for loving the current, and teams will make the run north towards the dam to “fish in the tail races. If there’s current flowing, they could be in contention to win. We’ve seen it many times where conditions are right up there where you can have a big bag and put yourself in contention to win even with spotted bass.” However, they feel an all largemouth bag will win around 23-24 pounds with at least 14 pounds to get a check in 40th place.

The weather “probably won’t play a factor even with the front coming in since it’s not really going to affect the water temperature that much that quick. But you can play like its November when it’s freezing and go swim a jig and two foot of water and catch twenty pounds. So they’re still going to be there this weekend too”

Cody and Rusty are trying to approach this event a little differently, “obviously the team that’s going to win Saturday will set their goal when they leave the ramp going out and fish for five big bites. We’ve had this discussion probably 20 times in the last week of how we’re going to approach it. We think we’ve got to be a little conservative since we are doing well in points. Ultimately, we want to continue to do well in points, but at the end of the day, we want to take that trophy home and cash a good check. So, we’re going to come out trying our best to catch a big bag, and if we have to make adjustments throughout the day and change our strategy to catch a fish to fill out a decent limit, we will do that too. We’re able to make those adjustments on the fly and let the day tell us what we need to do.”

All friends and family are welcome to attend this event, bring lawn chairs and practice social distancing. Everyone can watch the live weigh-in and over 4 hours of on-the-water live coverage on the ABT Facebook page and the ABT website. The launch and weigh-in will be held at Beeswax Landing 245 Beeswax Park Road Columbiana, AL 35051.