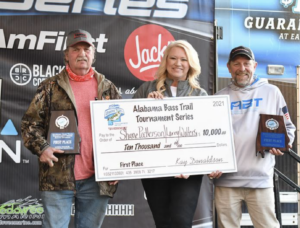 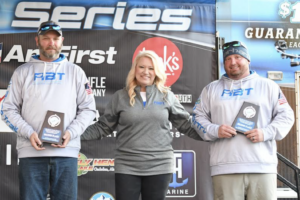 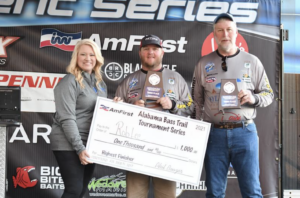 Lake Martin hosted the Alabama Bass Trail South division for the start of another season. After a deep freeze blanketed the south for nearly a week, anglers arrived Saturday morning to find the weather on what some would consider to be a warming trend. Fishing conditions were blue bird skies with temps in the 50s at midday, causing many anglers to adapt after a very cold practice. Catching fish isn’t typically a problem at Lake Martin with teams often catching over 30-50 fish a day, and the winning bag being anchored with a five pounder. The team of Larry Walters and Shane Patterson broke outside the numbers to bring home the win on the first stop of the ABT South Division.

Larry Walters and Shane Patterson made a 35 mile run in 27 degree temps past Parker Creek to a spot they found in practice to be holding fish. When they arrived, they quickly went to work and “caught a fish within ten minutes, but after that it kind of went dry,” said Shane. They cycled through about 12-15 spots fishing brush piles and were able to boat a limit of just 6 pounds. With that small limit about noon they returned to their starting spot, and this time the fish were ready. Here they caught a key 5-pound fish which was the kicker to put them over the top.

They targeted fish in 30 feet of water using a Ned rig with a ¼ oz round head teamed up with a green pumpkin senko, cut down to 4 inches. Larry said the real key for them “was using 6-pound test line fishing that deep.” He said, “the fish that deep are line shy and you really have to have small line.” They weighed in a mixed bag of four spotted bass and one largemouth. The team expected it to take over 16 pounds to win, so with just 13.91, they were excited to claim the win and the $10,000 first place check.

David Newman and Chris Patterson caught 13.25 for second place. The team said practice was really tough for them. They “found a spot on the last afternoon of practice where they felt they could scratch out a limit then go off-shore and hope to maybe catch 8 pounds.”  Shane said “that was the plan, and by 7:30 I caught a 4.5 pounds spot helping us realize the big fish were starting to move up shallow and we needed to stay” in that spot.

They described their most productive spot as a rocky point with docks for cover. “It had a shelf in 5 to 6 feet of water where we felt fish might come up and spawn and stage under the docks.”  They spent most of the morning in this area “flipping to the dock corners in 12 feet of water and dragging it out to 20 feet.” Their key baits were a homemade ¼ oz and 3/8 oz shaky head paired up with a green pumpkin blue flake trick worm and a smoke and purple trick worm.

They said, “once the sun came up high and the water calmed, our bite changed. We got a limit and culled up three times, but at 11:00 the bite died so we made a run up the lake to try and get a big largemouth. We were unable to get anything to bite.”

With 12.81 Rob Lee and Steve Winslett finished third. They are no strangers to Lake Martin winning here in 2019 with over 20 pounds and a 4th place finish here in the ABT Championship. Practice was very productive for them locating fish up shallow in 2 feet of water or less. “The cold weather doesn’t bother these fish, and once they commit up shallow they stay. Today was much different for us than practice; the blue bird skies really hurt us today.”

They started their morning with the hopes to catch 10 pounds of spotted bass on their first spot and then go shallow. In practice Steve said he caught a 2 pounder and when he got it to the boat, there were others chasing trying to get his bait away from the other fish. They describe this area as a high spot with a rock pile going into a spawning pocket, in about 10 feet of water. A ¼ oz Davis Baits shaky head with a Zoom trick worm in Alabama craw and one in green pumpkin were their key spotted bass baits. They were only able to catch two fish on this spot, so they had to make the move shallow.

They spent the rest of the day fishing shallow brush piles with a “homemade jig in black and blue using a Big Salty Trailer in black and blue and one in green pumpkin orange.” Fishing about 50-70 brush piles to finish out their limit in the afternoon, they caught two big largemouth: one weighing about 5 pounds and the other about 4.25 pounds. Their bites were very few and they only boated 8 fish all day.

Top five standings are below. For a complete list see https://www.alabamabasstrail.org/tournament-series/lm-results/ 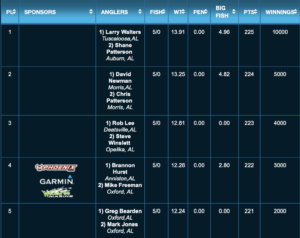 Download and listen to the ABT Podcast on your favorite Podcast app by searching for “Alabama Bass Trail Podcast.”  The Podcast is released each week on Tuesday. This week podcast will feature winners Larry Walters and Shane Patterson.