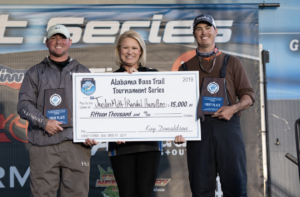 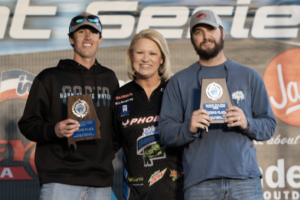 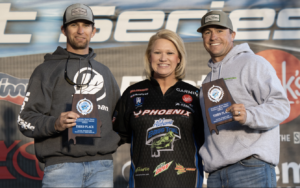 November 10, 2019- On a crisp, cool, 24° morning 229 boats, the largest registered field for an Alabama Bass Trail event, converged on Lay Lake to have a shot at taking home over a $70k total payout.  Justin Mott and Randal Hamilton ended up on top with 18.17 lbs taking home $16,500 with first place and contingency money.

Early predictions were that the whole lake would be in play for this event, the fall pattern would not be in full effect and anglers would all have a good chance of catching a limit. However, the cooler temps and blue bird skies really affected the bite for many anglers.  The anglers who did well either found schooling fish or were able to put together a run and gun pattern to keep finding the fish that were biting.

Justin and Randal both fish the ABT South Division but with different partners.  They grew up fishing the Alabama River together and said even though they have fished against each other for years on the ABT, they have become good friends.  About a month ago Randal called Justin and asked if he wanted to fish the Open. Justin agreed, so they teamed up.

They spent a good amount of time practicing for this event and were able to locate numerous areas that would produce a fish here and there.  They felt like the key was only going to the areas that were producing fish and skipping over the other areas. After practice they thought they had a chance to win if they could catch about 16 lbs and get lucky enough to catch a big fish too.

Tournament day started quickly with a stop right at the mouth of Beeswax throwing swim jigs. Having no luck there, they cranked up and headed south towards the dam. They caught a couple fish at their second stop and after running a long stretch with the trolling motor on high, they had a good solid limit of fish before 11 am.  They continued to work all the way down to the dam.

After 11 am the fish just shut off.  Justin said the fish “go through feeding periods this time of year, and where they will feed early they will go dormant for a while and turn back on in the afternoon.  But, because of the cold front that moved through, the morning bite was pushed a little later which also pushed the afternoon bite farther out. So, it was really a waiting game for the fish to get back into position to bite.”

With a check-in time of 4:00 pm they were hoping to be able to capitalize on the afternoon bite, so they made the run back to Beeswax, put the trolling motor on high and started to cover water.  In the final minutes of the day they caught the difference maker- a nice largemouth that pushed their weight over the 18 lbs needed to win.

They headed to the scales with what they felt like was about 16 lbs.  When the team before them in the weigh-in line had a little over 16 lbs on the scales, Justin and Randal looked at each other and said, “Wait a minute; we have more weight than we thought!”  They were so excited to see their fish tip the scales at 18.71.

The team of Justin Hamner and Jimbo Williams finished in 2nd place with 17.84 lbs. The key for them, like early predictions, was to cover all types of water saying “we probably hit 60 spots today.”  They fished from the steam plant all the way to the lower dam. “We caught fish on all types of structure and in all depths of water. The fish were really scattered and that’s part of what made it hard.”  Their key baits were all shad type baits: lipless crankbaits, jerk baits and shallow running crankbaits. They had their first keeper within 20 minutes and soon after had a limit. They caught fish both deep and shallow in the backs of pockets.  They “stopped fishing for spots at 12pm and never culled again after that.” They left their spotted bass pattern to try to get a largemouth bite that didn’t work out. So, when they dropped their bag on the scale, they were really disappointed that they left their spotted bass biting instead of staying and trying to upgrade a little more.

To make it in to the top ten it took almost 16 lbs with 10th place going to the team of Nicholas Turner and Joe Lay with 15.89 and a $1000 paycheck. The top ten results are below, but for complete results visit https://www.alabamabasstrail.org/tournament-series/abt-open-results/ 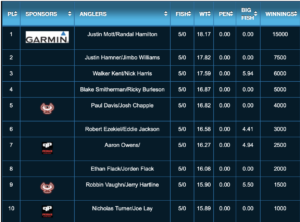 This concludes another great year on the Alabama Bass Trail.

This entry was posted in News, Tournament Series. Bookmark the permalink.