Jack and Kathy Womack an ABT Couple

Jack and Kathy Womack an ABT Couple

October 2, 2017 – Decatur, Ala. – When the rule announcing the Championship qualifier spots in the couples division was announced – and the championship was set for Logan Martin Lake; Jack Womack knew who his partner would be.  “It was going to be my wife Kathy,” he said.  “I fished it with another guy last year, but wanted to make this championship with Kathy.”

While their intention was to qualify out of the couples’ division, Team Womack did much more than that; they showed their skills all year and finished the season in second place – in the Northern Division Angler of the Year points race.

He said it surprised them a little as well.  “We never expected to finish that high in the points, but we figured we would qualify for the championship,” he said.  “This whole year was truly a highlight reel for us. We cashed a check in every event except Smith Lake, and there we finished 48th; which was like winning for us, seeing as how we’d never been there.”

They reached a high water mark for the season with a second place finish at Neely Henry Lake.  “We had a really good tournament there at Neely Henry,” he said.  “We would have won if I hadn’t lost two key fish; but that’s fishing; we really had a good year.”

They reported being cautiously optimistic about the championship next week at Logan Martin.  “We lived there for 12 years, and really love fishing Logan Martin,” he said.  “It’s a tough time of the year to be there – or anywhere in this part of the country really because the fish are in transition, but I’d still expect it to be a good tournament.”

He said that the conditions will make for teams having to work to locate the fish.  “The fish are already suspending a fair amount, and it could only be more prominent if Alabama Power begins to lower the water levels,” he said.  “That could make for some really tough conditions, but I think we’ll be okay.

“In truth, it was this tournament that made me beg Kathy to fish this year with me, so we’re looking forward to it,” he said.  “We fish really well together and have a lot of fun.  She is our time manager, and really keeps us from getting stuck in a rut – I hope we’ll be able to keep our roll going for one more event.”

This entry was posted in Events, News & Events, Tournament Series. Bookmark the permalink. 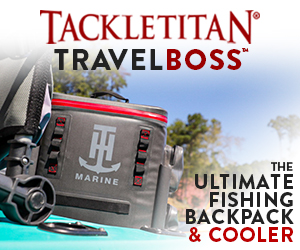