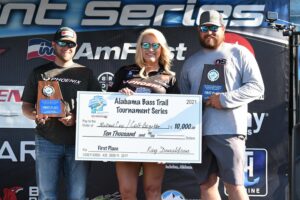 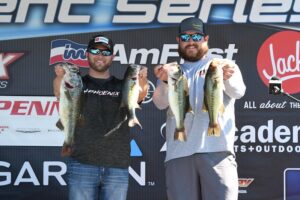 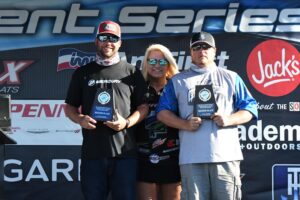 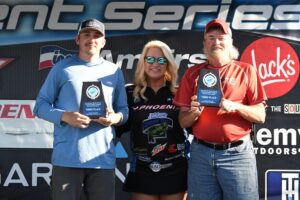 Lay Lake was the third stop for the Alabama Bass Trail South Division, and once again, Mother Nature wasn’t providing favorable fishing conditions. A strong weather system was predicted to move through the area on Saturday with high winds, tornados and possible hail. After consulting with local weather officials and EMA, the decision was made to postpone the tournament to Sunday to keep anglers safe and out of harm’s way. The system moved through on Saturday and conditions improved allowing the tournament to be held on Sunday. When the sun rose Sunday morning, 225 teams were anxious to get back in action to claim the $10,000 first place payday.

Every time you hear anglers talk about catching fish at Lay Lake, you also hear them mention a swim jig. It seems it’s almost impossible to come to Lay Lake and not throw a swim jig. The lake is abundant with shallow vegetation and current. When you add in an early spring shad spawn, you have ideal conditions for a swim jig bite.

The first place team of Michael Cox and Colt Boyette did just that and caught 19.27. However, they didn’t throw the typical swim jig. They caught their better fish in the grass in the back of a pocket on a homemade jig with a Dirty Jigs skirt in Alabama Brim color paired up with a Strike King Rage Menace trailer. They filled out a limit with this bait early and caught a kicker fish weighing 6.23 pounds. They broke outside the norm throwing a White Swim Jig and opted for using the Alabama craw color that mimicked brim. A key for them was how they rigged the Menace: instead of rigging it flat, they rigged it so the tail was vertical and portrayed a swimming motion much like a brim.

After filling their limit, they changed areas and baits. They also used a War Eagle fitness 5/16oz inch Chartreuse Moose with a gold Indiana Blade. They fished small pockets in a major creek channel on the lower end of the lake because all the rain caused water to flow out of the creeks. Why not use this flow to their advantage to catch fish? Fish were staging up in the small pockets and points to get out of the current, so as they fished through the creek, they positioned the boat downstream from a point and made cast upstream to allow the spinner bait to work back to the boat with the current using this pattern throughout the creek. Boat position was critical, and they felt the need to set up just outside the point in the current and cast into the point which caused a little eddy where the fish staged up. The fish were in 6-10 feet of water, and they would cast up to 3 feet working it back to the boat.

Today was a huge payday for them! They won in a brand new Phoenix Bass boat purchased from Wedowee Marine just over a week ago, so they added to their first prize winnings with bonuses from Phoenix and Wedowee. Last time they got a new boat, they won the next tournament, and the same thing happened today. They also purchased a truck from Bill Penny Toyota cashing a Toyota bonus check for that as well. Today’s winnings including bonuses total $18,500.

The second place team of Matt Adams and Chris Wages said practice for them was very spotty. They spent a lot of time trying to find bedding fish during practice and were able to find a few saving them for tournament day. “Having the tournament on Sunday helped us,” they said. The plan for them today was to capitalize on practice and catch the bedding fish they found and hope to build on that. “Today the bite was better than in practice,” and they could tell the fish size was a little better as well.  They described their key spot as a spawning bay where fish have been moving in and out. The first stop was on a bedding fish they weren’t able to catch but staying in the area led them to a 3 pounder they were able to land. They said the wind made it a little difficult to sight fish, but they were able to fish the grass and catch a solid bag weighing 18.14 pounds.  All their fish came on a Dirty Jigs white swim jig. Matt said they actually lost a good fish twice that caused them the win today. He said second place today kind of “feels like kissing your sister,” especially because they had the winning fish on today. He said it was a good win against a very difficult field. They took home $5000 for their 2nd place finish.

The third place team of Brandon Jones and Barry Jones decided to fish today without any practice. Brandon said “we just haven’t had any time to practice and although this is what we consider to be their home lake, we still feel this lake is a hard place to do well.” They planned to come today and just go fishing. He said, “we hoped we could scratch out a limit, keep some points and move on to the next event.” They knew a few places to go and a spot where the fish push shad up early in the morning. Barry said, “while waiting for take-off this morning, I decided to tie on a Pop-R and see if they would hit it today.” On that first spot with the first cast one blew up on it, but he missed it. They continued to work the area getting more and more bites. Eventually, they worked back through the area a second time and caught two fish on back to back cast.  Within 2.5 hours they had a limit “just fishing.” Their key baits were a Spro Poppin Frog, a Berkley Chopo, and a Stanley Ribbit Buzz Frog- all in white. All their fish came in 2 feet of water or less. They said they were a little surprised at the third place finish especially since they didn’t have any time to practice. Today they just went fishing and caught 17.94- good enough for 3rd place and $4000.

Top ten standings are below for a complete list see: https://www.alabamabasstrail.org/tournament-series/wl-results/ 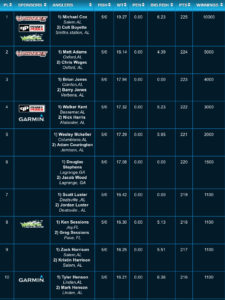 Download and listen to the ABT Podcast on your favorite Podcast app by searching for “Alabama Bass Trail Podcast.”  The Podcast is released each week on Tuesday. This week will feature the winners of Lay Lake Michael Cox and Colt Boyett.