Posted on May 8, 2020 by ABTTournamentSeries 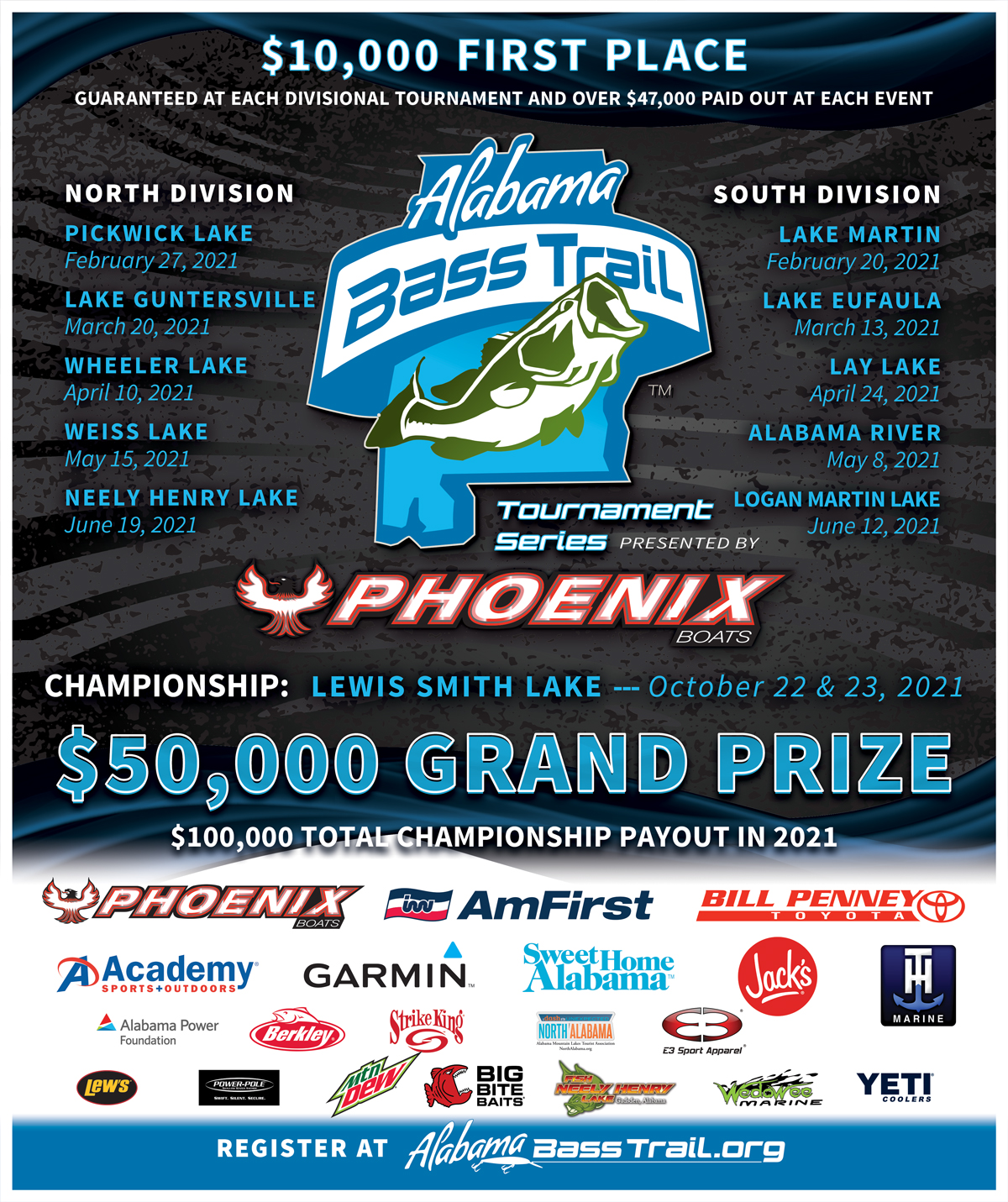 Decatur, Ala. (May 1, 2020) – The Alabama Bass Trail (ABT) is pleased to unveil dates and locations of the 2021 tournament series which includes a payout reaching over $580,000. Returning for the eighth season, the team-style tournament series is held on eleven different lakes of the Alabama Bass Trail beginning February 20, 2021, with the championship tournament to be held on October 22-23, 2021. Anglers in the no-entry-fee championship will be competing for over $100,000 in cash, including a $50,000 first place prize and top bragging rights for the year.

“Our team, along with the host cities, have worked extremely hard to put together a schedule that highlights Alabama lakes while allowing anglers from across the United States to showcase their abilities,” said ABT Program Director Kay Donaldson. “Hosting events the size of the ABT Tournament Series requires a commitment and a tremendous amount of work from the local host cities and every year, these communities go out of their way to accommodate our event and our anglers.”

Hosted by the Chamber of Commerce of Walker County, the championship tournament will be held October 22-23, 2021, on Lewis Smith Lake.

“The Alabama Bass Trail is a great opportunity for Alabama lakes and local businesses to reach hundreds of loyal and determined anglers. As we prepare for a new normal following the coronavirus pandemic, we look to the 2021 schedule with much anticipation. We wish all of the anglers a successful year and encourage them to take some time to enjoy all that the host cities have to offer. We also encourage locals to come out and experience the excitement as anglers weigh in their fish and compete for the big check and the prestigious recognition attached to this tournament trail,” said ABT Chairman of the Board and Cherokee County Chamber of Commerce Executive Director Thereasa Hulgan.

Sanctioned by B.A.S.S. (Bass Anglers Sportsman Society), the ABT Tournament Series contains two divisions, North and South, and each division is made up of five tournaments on five different lakes. The maximum number of boats for each tournament is 225. Teams must fish in all five tournaments in their respective division; no single entries will be allowed.

Anglers who fished all five events in their respective divisions in 2020 will be given a priority entry period beginning August 1, 2020, at 6 a.m. online at www.alabamabasstrail.org. Registration opens for new teams August 15 at 6 a.m. The entry fee is $1,300 per team, which includes registration for all five tournaments in the respective division. Each team may choose to pay a $500 nonrefundable deposit to hold the team’s spot. The balance of $800 must be paid by January 15, 2021.