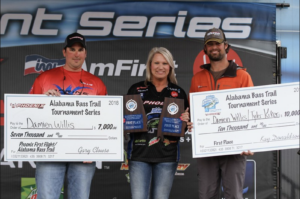 Before deciding to fish together as a team Damien and Tyler fished many of the same events on the Coosa chain and became familiar with each other.  Both lost their partners around the same time almost five years ago, and it was then that they decided to join together in some events on the Coosa River.  Their journey began with success fishing those events and with wins in a good many of them. Tyler says the first time he got in the boat with Damien, he knew that it was going to work out for them.  The guys actually love fishing so much together that they bought a saltwater boat together and spend good amount of time on that boat as well- when they aren’t tournament fishing of course.

Damien and Tyler both have previously fished the ABT separately.  Damien has fished it every year and Tyler fished one year previously with another partner.   In 2019, already being established as a team who works well together, they decided to fish the ABT in hopes of continuing their success as a team.

Their second event together on the ABT was at Wheeler Lake.  Damien had “one of the worst practices of his life for that event” and was convinced if he caught a couple of keepers, he would do anything Tyler wanted to do after that.  Tyler had 2 or 3 spots he knew had big ones because he had caught some there the week before. On tournament day they returned to those spots, caught a ton of fish and had a blast!  They weren’t expecting to win the event going in, but at the end of the day, they brought 22.70 pounds to the scales and grabbed hold of the first place trophy and check. They both agreed that tournament ended up being a whole lot of fun.  Damien doesn’t think “anyone has placed second in the ABT as many times he has and said it felt good to finally win.” It really gets old finishing second often, but this time they were glad it was them in first place.

The next event was on Damien’s home lake- Weiss Lake.  In practice he didn’t feel like they were able to figure out a consistent pattern to help them get the 4lb plus bites they were finding.  They were getting the bites; it just seemed so random when they caught quality fish. They made the decision on tournament day to fish an area where they saw a few fish swimming down the bank and saw a few on the bed.  The plan was to stay there all day and catch a decent bag and hopefully finish high enough to cash a check. The day went by and about 45 minutes before check-in they realized they were wrong so a last ditch effort was made to fish a pattern they fished the weekend before to catch 20lbs.  Once on the spot, the realization came that they should have been fishing there all day long. Four of the fish they weighed in were caught there including the big fish for the tournament. Tyler actually had the winning fish bite him twice! This catch gave them a shot at winning back to back events.  Instead, it was another 2nd place trophy for Damien, this one made it five times in the ABT.  “We are kind of a second place machine; we have finished second way too much,” Damien said.  However, “it is hard to complain when you’re able to salvage the day in the last few minutes and have a chance to win.”

Damien welcomed new baby, Kirklyn, to the family September 4, and says he has fished less in the last six weeks since middle school.  He’s ready to get back to fishing and is looking forward to the BASS Team Championship. Damien has been to Lake Hartwell in the spring when the herring were spawning and “absolutely had a ball, but I know this December tournament will be nothing like that.  We basically have to go learn the lake again. Neither one of us are herring experts but I really, really like that time of year and love winter time fishing. We are optimistic, and if we to spend time practicing, I believe we can catch them.” Both feel like their teamwork and similar fishing styles will work to their advantage.  Even the times they don’t fish the same way works to their advantage because it helps them narrow down water a little faster. They are a very versatile team and don’t have a favorite bait. “Our favorite bait is whatever the fish are biting.” The pair hopes the “second place curse” doesn’t get them in this event, but if that’s the case, hopefully one of them is in first.

This entry was posted in News. Bookmark the permalink.