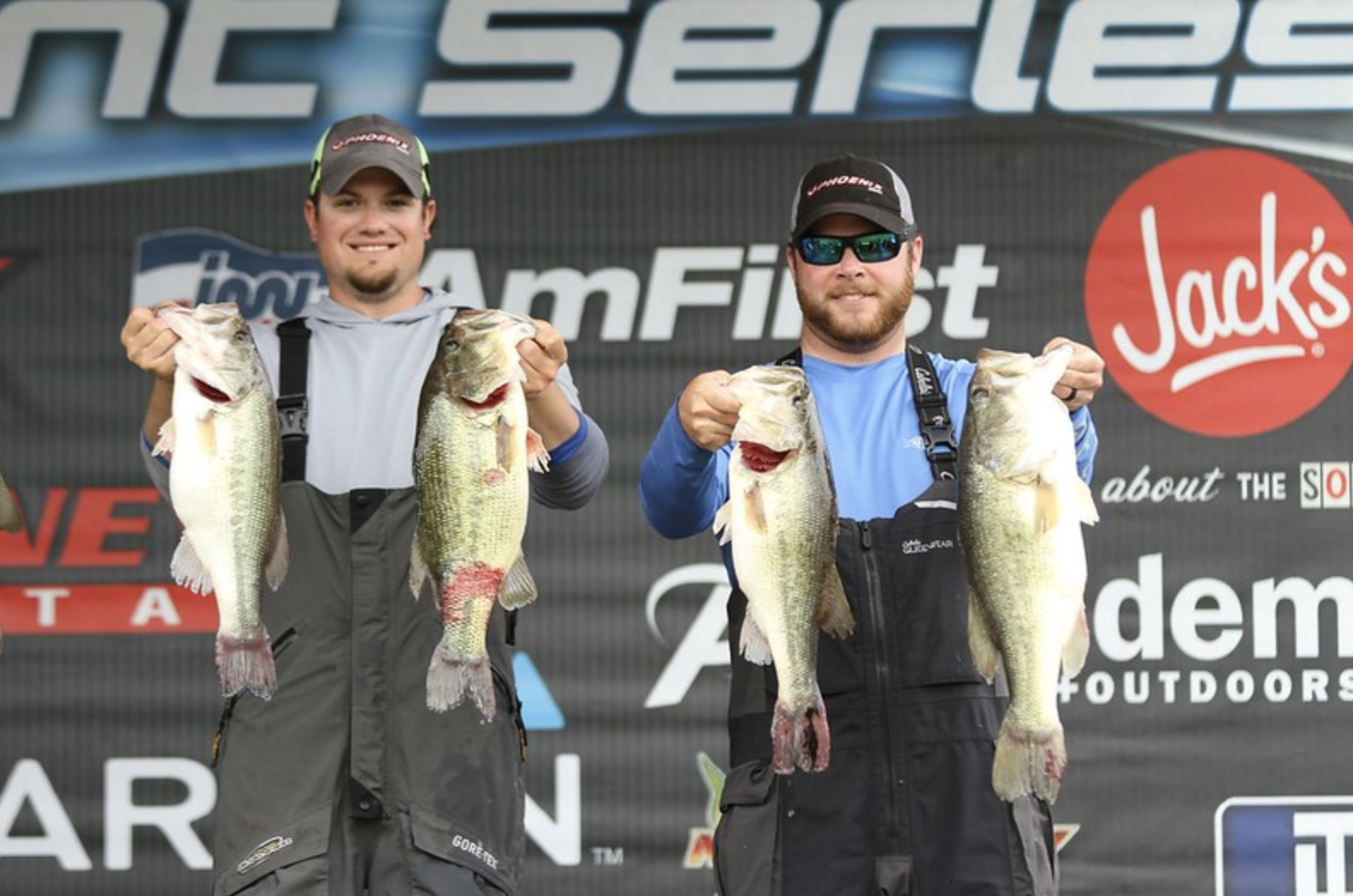 It’s not often a team from Tennessee comes to Alabama and wins it all, but it happened on the Alabama Bass Trail North Division this year. Nolen Spencer and Jonathon Reese, TN natives and huge VOLS fans, did just that and won AOY in the North. This qualifies them to fish the BASS Team Championship December 11-14 on Lake Hartwell. They are this week’s BASS Team Champion Profile.

Both grew up fishing from a very early age in the middle Tennessee area. Jonathon said he started wading creeks fishing as soon as he could walk and maybe earlier than that. Nolen spent many days sitting on a five gallon bucket on the bank of a farm pond fishing with his granddad. That early love for fishing has continued to grow through the years.

The two crossed paths at Middle Tennessee State University when one day in class Jonathon turned around to answer a question from this guy wearing an old Bandit hat. He answered his question but also made a comment about his hat. As it turned out Nolen liked to fish as much as he did, so they struck up a friendship and began fishing together. They fished one semester together on the fishing team in college actually winning their first tournament together on Chickamauga Lake.

After college they spent their time fishing on lakes they grew up around at home and joined a local club where they spent time improving on fishing as a team. A few years ago they felt like they were in a rut fishing the lakes around home and looked to try something new. Some friends mentioned they should fish the ABT saying it was a well run trail with really good competition. In 2017 they signed up for their first season which was a learning experience for them. They “learned the lakes in North Alabama were way better than the lakes they grew up around” and really loved the fishing.

With their first year behind them and having gained more experience, they were ready for another year. It didn’t take them long in the year to find what very few teams ever find. They had their perfect day on Weiss Lake, a place they had never fished before. It is often said you have to have the perfect day where everything goes exactly your way to win an ABT event. Well, it was their turn to experience that kind of day. In fact, it was so good, they quit fishing at 11am and ran to the shade of a marina slip to take care of their fish and wait on the scales to open. As soon as the scales opened, they weighed in an unbelievable catch of 26.84 lbs beating their closest competitor by almost 9 lbs.

The goal for them in 2019 was to make the Bass Team Championship. They did really well in all events this year cashing a check in every one. Since starting the ABT, they have gotten out of their comfort zone of shallow water fishing and become more comfortable fishing post spawn conditions and offshore. This year Pickwick played perfectly into those conditions. “We kinda had that one teed up for a while,” said Nolen. In both days of practice they said they “probably caught a hundred fish each day but really weren’t catching anything over 4.5 lbs.” On tournament day they made a long run about 40 miles down river feeling comfortable they could catch about 18-19 lbs. Looking back they don’t want to say they didn’t do everything they could, but they left their fish biting- they were biting so well they were literally catching them every cast. Jonathon said at one point he “didn’t know how much longer he could do this. He was burning a bait and his arm was just given out from cast after cast.” Jonathon caught their biggest fish the last cast before they left saying, “It was really hard to leave that spot.” However, in anticipation for the long run back and possible storms threatening, they left their spot an hour early to allow time in case anything else went wrong. They made it back to the ramp an hour early and weighed in 26.73 lbs- enough for second place. They were happy with that finish but still “kinda wonder what if we had stayed longer. “

Having now tested themselves against some of the best anglers in the country they feel prepared to head to the BASS Team championship. Fishing new water doesn’t seem to affect them; they actually like that style, especially after the Weiss Lake win. They’ve spent some time researching Hartwell but don’t have a plan yet. Jonathon often asks Nolen, “What’s the plan?” at events they fish to which he replies, ”I will know when I see it.“ So that’s the plan heading to Hartwell. But the plan this year has also been to make the Bassmaster Classic. On the way to the first ABT event this year, Nolen told Jonathon “I’m gonna tell you something Jack… one of us is gonna be fishing the Bassmaster Classic this year! He (Jonathon) thought I was an idiot, but now we made the deal and if it comes true it will be pretty cool!”