Posted on October 22, 2019 by ABTTournamentSeries 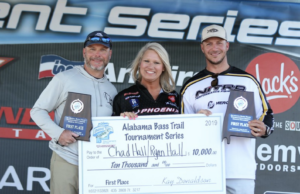 October 21, 2019 – Decatur, Ala. – Can’t you smell it in the air? It’s championship time on the Alabama Bass Trail. The top teams from both the North and the South Divisions of the Alabama Bass Trail are set to begin practice on Lake Guntersville, and the hopes, dreams and goals of all 181 teams in the field is to collect the keys to the grand prize. The winners of the event this weekend will receive a Phoenix 819 with 200 horsepower outboard, equipped with equipment from T-H Marine and Garmin electronics.  The grand prize package is totaled at more than $50,000.

Lake Guntersville has held a rich history on the ABT series since the 2014 inception of the trail.  The first Alabama Bass Trail event, and the site of several giant weight tournaments all provide a framework for ABT benchmark events.  However, 2019 marks the first time that Lake Guntersville will host the ABT Championship.  Hosted out of Goose Pond in Scottsboro, Ala., the championship is set to produce the type of fireworks that Tennessee River fisheries can provide.

Fresh of their victory at the SPRO Frog tournament last weekend, Chad and Ryan Hall; the 2019 Weiss Lake ABT Champions said that despite the tougher than typical Lake Guntersville, they are ready for the event.  “OH, we’re really excited about this weekend,” they said.  “There’s nowhere else in this state that we could fish an event of this magnitude, against this quality of a field and do it for no entry fee; this is a big deal.”

As far as the fishing goes, the Halls said that Guntersville has been tough.  “The weather changes and the amount of pressure this lake has been under for the past five weeks has really had an effect on the fishing,” they said.  “It’s not going to be an easy tournament, but someone is going to figure them out.”

According to anglers recently on the lake, the water temperature has dropped more than 20 degrees in the past two weeks, and that has made options varied.  The Halls said that anything could go.  “You really can’t rule anything out as far as techniques go because the conditions have been so different,” they said.  “Anything from a frog bite, to a grass bite to moving baits to finesse could play a big part of it this week.  The grass has taken a beating, so finding good patches will be important, but they could be anywhere.”

They also reported that the weights should be lower than one would usually expect for a fall bite on Guntersville.  “It’s probably going to take 37 to 39 pounds to win the two-day event,” they said.  “Someone will catch a good bag and then follow it up with a smaller one, and that may do it.

“All we know is that we’re ready to go, and looking forward to the weekend.”

This entry was posted in News, Tournament Series. Bookmark the permalink.