Posted on September 18, 2018 by ABTTournamentSeries

with Bill Mayo and Walt Roberts
by Dan O’Sullivan

September 18, 2018 – Decatur, Ala. – The Northern Division of the Alabama Bass Trail wraps up its 2018 season this weekend.  Typically, the point race would have been decided in June, but thanks to the skies opening up in February, with the safety of the field in mind, the finale was rescheduled to this week.

Along with the regular season battle for who will be the winner of the individual Pickwick Lake tournament, but the season-long Anglers of the Year points race will most likely come down to this weekend between Charlie Cummings and Greg Pugh and Walt Roberts and Bill Mayo.  The teams are separated by a total of three points, and the second place team of Roberts and Mayo have a nine point lead over the third place team of Grant Hopson and Wes Ward.

Roberts and Mayo said they have been preparing, and that they are looking forward to Saturday.  “We’re looking forward to the event, and think it should be a good one,” they said. “We will say this, we have been doing our homework, and we are not fishing to maintain our standings; we are going all out to try and win this title; this field is too good to just hang back and hope.”

As for the tournament, the pair said that they feel like it will take a healthy weight to win, but that the fishing will not be easy.  “It should take 20 pounds to win, but it will not come easy,” they said. “12 to 14 pounds will probably get a check because catching fish is fairly easy, but getting the right one’s is not.”

They said that they anticipate the field being separated by the grass and the offshore bite, but the majority of the field will be shallow.  “Topwater around the grass is probably the easiest bit out there, and most of the field will focus there,” they said. “We have not made our decisions, but we will, and we will go after it hard; it’s going to be a fun wrap up for the season.”

The final event of the 20018 Alabama Bass Trail season at Pickwick Lake happens September 22 out of Florence, Ala.  The mandatory pre-tournament registration and angler information meeting happens on Friday September 21 at the Florence Conference Center located at 10 Hightower Place in Florence, AL 35630 with registration happening from 5:00 P.M. – 6:30 P.M. and the pre-tournament meeting beginning at 6:30 P.M.  Takeoff and weigh-in occur at McFarland Park located at 200 James M. Spain Drive in Florence, AL 35630 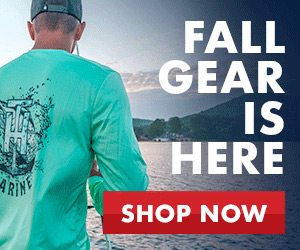